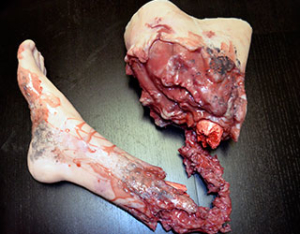 Severe trauma prosthetics manufacturer Simetri has completed production of simulation kits ready to be delivered to the US Army.

A total of 91 kits are on order and have been developed at a rate of some 12 kits per week.

Moulage Sciences and Training is the prime contractor and seller of the kits while Simetri is the developer and manufacturer.

“Each kit consists of a full simulation for each limb. and also partial amputation,” Angela Salva, president and CEO of Simetri, told Shephard at a pre-I/ITSEC briefing. “It helps show how to treat, stabilise, save lives and prepare for transport.

“The goal is to develop some highly realistic and useable solutions. They are identical in structure, but the painting is random and haphazard.”

The systems developed for the army also contain some 100 wounds, both for use on mannequins and humans for training and the prosthetics are also able to bleed.

They come in different skin colours so that when they are on humans they blend into the skin, and the company also provides make up for additional realism, although the army did not choose to add it.

Kits include entrance wounds, exit wounds and burns, as well as bleeding wounds that show bones, muscles and tendons. They also include chemical and thermal burns and lacerations, and shrapnel including mock nails and glass.

Each army simulation and training centre will have some six kits, and on top of the 91 on order, there are also options for 21 more for NATO customers, including Korea, Germany and Brussels.

“We’re in anticipation of some additional research work,” Salva explained, noting that this will include work on different simulation devices, from mannequins to video games.

Simetri is also looking to market the prosthetics internationally, for which the NATO work extending from the army contract will help.

Salva said there was an effort towards standardisation because at the moment different brigades train differently, and standardisation would lead to easier cross-brigade, cross-service and cross-nation training.

While the film industry was the original pioneer of the prosthetic industry, the company has carried out its on research.

“We studied all of the different materials and commercial products,” Salva explained. “You want to make it as easy to reproduce.”

Simulated odours are also optional, because the grotesque and real nature of the kits make soldiers “react quickly and save lives.”

“To get something that realistic is expensive. At the moment the army is willing to pay for that. It’s not cheap but it.s very realistic.”

Salva said that she saw different variations of this being required beyond current theatres, although the army is currently focused on front line injuries.

“We offer the army the option to refine or change things very quickly. There are things that we.re continuing to look at to make it more realistic.”